I know it is hard to grasp, but it is mathematically viable: there are solids that require an infinite amount of material to construct, yet they have no volume! Of course, having infinite surface area makes it impossible to actually build these objects, but it is feasible to come up with reasonable approximations. One approximation to such a construction—the so-called Menger sponge—goes like this:

After three steps of this process we already observe an elegant geometrical wonder. 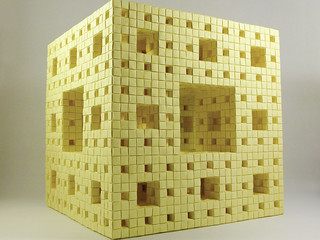 This object was first described by Karl Menger in the 1920’s, while a student at the University of Vienna. After the end of World War II, Menger accepted a position at the Illinois Institute of Technology, where he contributed to beautiful mathematics in the fields of probabilistic and hyperbolic geometry.

In the early 1990’s, Dr. Jeannine Mosley—an electrical engineer from MIT, with vast experience in computer graphics designing 3D modeling software—had the brilliant idea of creating the level 3 of this sponge by paper folding. The building blocks of this monster being simple cubes, that one could carefully craft from six light-yet-sturdy small pieces of paper. All these pieces needed to have exactly the same shape and size, naturally. For ten years, from 1995 to 2005, she patiently coordinated a very ambitious project where several teams carefully folded, linked, and assembled tens of thousands of business cards into more and more complex shapes. The result was briefly on display in June 2005 at the Origami USA annual convention in Manhattan.

Dr. Mosley, inside of her Business Card Menger Sponge
(Photo by Ravi Apte)

To give you an idea of the magnitude of this enterprise—and at the same time pose a fun puzzle if you are mathematically inclined:

There are currently 13 more level-3 Menger Sponges in the United States alone. There are other 9 in Europe, one in Asia, and one more in New Zealand. The following (static) Google map shows their locations as of November 6th, 2014. 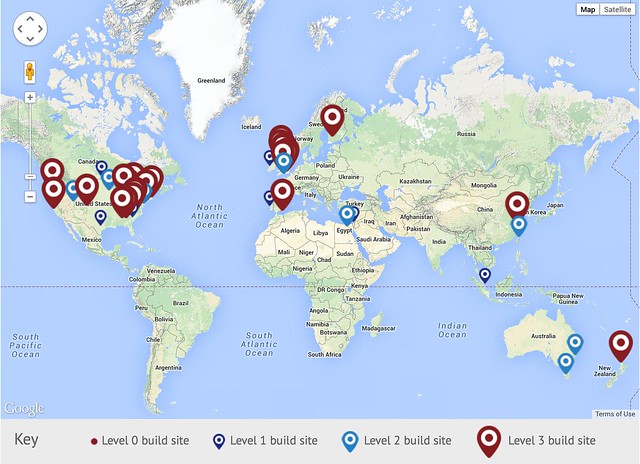 We, at the Department of Mathematics of the University of South Carolina, are determined to build the next one.

But there is no need to wait 10 years to get this done. Some folks at the Queen Mary University of London figured out a way to reduce the assembly time to just a few days, and posted detailed instructions at megamenger.com.

We will start slow: First, taking advantage of our annual USC High School Math Contest on January 31st, 2015, where we will recruit the help of all high school students, instructors and relatives in attendance. We plan to build that day as many level 2 sponges as we can afford. At a later date, we mean to organize a larger group of volunteers, so we can assemble the final level 3 sponge.

But success of this enterprise starts, obviously, by collecting enough business cards. Just in the first week we gathered enough material for almost one level 2 Menger sponge. Where are we going to obtain all those remaining 48,000+ cards? Do you have any you could spare? We would love to get our hands on them. Bring them to room 413 in LeConte or, even better, drop us a comment below so we can arrange for pick-up.