On Tuesday, September 8th 1857, the steamboat SS Central America left Havana at 9 AM for New York, carrying about 600 passengers and crew members. Inside of this vessel, there was stowed a very precious cargo: a set of manuscripts by John James Audubon, and three tons of gold bars and coins. The manuscripts documented an expedition through the yet uncharted southwestern United States and California, and contained 200 sketches and paintings of its wildlife. The gold, fruit of many years of prospecting and mining during the California Gold Rush, was meant to start anew the lives of many of the passengers aboard.

On the 9th, the vessel ran into a storm which developed into a hurricane. The steamboat endured four hard days at sea, and by Saturday morning the ship was doomed. The captain arranged to have women and children taken off to the brig Marine, which offered them assistance at about noon. In spite of the efforts of the remaining crew and passengers to save the ship, the inevitable happened at about 8 PM that same day. The wreck claimed the lives of 425 men, and carried the valuable cargo to the bottom of the sea.

It was not until late 1980s that technology allowed recovery of shipwrecks at deep sea. But no technology would be of any help without an accurate location of the site. In the following paragraphs we would like to illustrate the power of the scipy stack by performing a simple simulation, that ultimately creates a dataset of possible locations for the wreck of the SS Central America, and mines the data to attempt to pinpoint the most probable target.

We simulate several possible paths of the steamboat (say 10,000 randomly generated possibilities), between 7:00 AM on Saturday, and 13 hours later, at 8:00 pm on Sunday. At 7:00 AM on that Saturday the ship’s captain, William Herndon, took a celestial fix and verbally relayed the position to the schooner El Dorado. The fix was 31º25’ North, 77º10’ West. Because the ship was not operative at that point—no engine, no sails—, for the next thirteen hours its course was solely subjected to the effect of ocean current and winds. With enough information, it is possible to model the drift and leeway on different possible paths.

We start by creating a data frame—a computational structure that will hold all the values we need in a very efficient way. We do so with the help of the pandas libraries.

Each column of the data frame herndon is to hold the latitude and longitude of a possible path of the SS Central America, sampled every hour. Let us populate this data following a similar analysis to the one followed by the Columbus America Discovery Group, as explained by Lawrence D. Stone in the article Revisiting the SS Central America Search, from the 2010 Conference on Information Fusion.

The celestial fix obtained by Capt. Herndon at 7:00 AM was taken with a sextant in the middle of a storm. There are some uncertainties in the estimation of latitude and longitude with this method and under those weather conditions, which are modeled by a bivariate normally distributed random variable with mean (0,0) and standard deviations of 0.9 nautical miles (for latitude), and 3.9 nautical miles (for longitude). We create first a random variable with those characteristics. Let us use this idea to populate the dataframe with several random initial locations.

To estimate the corresponding celestial fixes, as well as all further geodetic computations, we will use the accurate formulas of Vincenty for ellipsoids, assuming a radius at the Equator of \(a = 63781374\) meters, and a flattening of the ellipsoid of \(f = 1/298.257223563\) (these figures are regarded as one of the standards for use in cartography, geodesy and navigation, and are referred by the community as the World Geodetic System WGS-84 ellipsoid)

A very good set of Vincenty’s formulas coded in python can be found at wegener.mechanik.tu-darmstadt.de/GMT-Help/Archiv/att-8710/Geodetic_py.

In particular, for this example we will be using Vincenty’s direct formula, that computes the resulting latitude \(\phi_2\), longitude \(\lambda_2\), and azimuth \(\alpha_2\) of an object starting at latitude \(\phi_1\), longitude \(\lambda_1\), and traveling \(s\) meters with initial azimuth \(\alpha_1\). Latitudes, longitudes and azimuths are given in degrees, and distances in meters. We also use the convention of assigning negative values to the latitudes to the West. To apply the conversion from nautical miles or knots to their respective units in SI, we employ the system of units in scipy.constants.

We simulate the drift according to the formula \(D = (V + \gamma W)\). In this formula \(V\) (the ocean current) is modeled as vector pointing about North-East (around 45 degrees of azimuth) and a variable speed between 1 and 1.5 knots. The other random variable, \(W\), represents the action of the winds in the area during the hurricane, which we choose to represent by directions ranging between South and East, and speeds with a mean 0.2 knots, standard deviation 1/30 knots. Both random variables are coded as bivariate normal. Finally, we have accounted for the leeway factor. According to a study performed on the blueprints of the SS Central America, we have estimated this leeway \(\gamma\) to be about 3%.

This choice of random variables to represent the ocean current and wind differs from the ones used in the aforementioned paper. In our version we have not used the actual covariance matrices as computed by Stone from data received from the Naval Oceanographic Data Center. Rather, we have presented a very simplified version.

Let us plot the first three of those simulated paths: 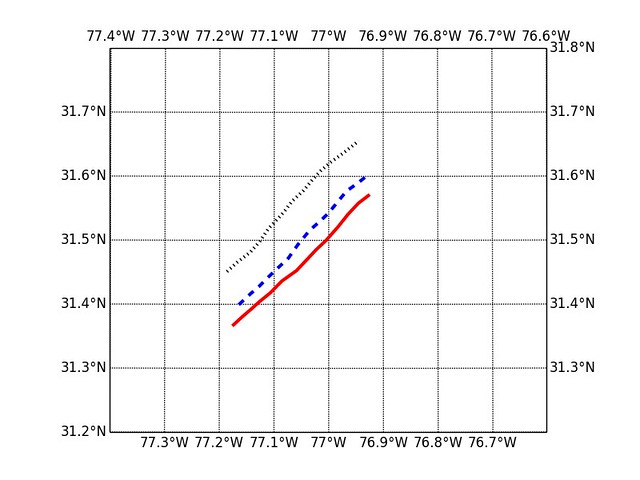 As expected they observe a North-Easterly general direction, in occasion showing deviations from the effect of the strong winds.

The advantage of storing all the different steps in these paths becomes apparent if we need to perform some further study—and maybe filtering—on the data obtained. We could impose additional conditions to paths, and use only those filtered according to the extra rules, for example. Another advantage is the possibility of performing different analysis on the paths with very little coding. By issuing the command herndon.loc(axis=0)[:,'Lat'].describe(), we obtain quick statistics on the computed latitudes for all 10000 paths (number of items, mean, standard deviation, min, max and the quartiles of the data).

The focus of this simulation is, nonetheless, on the final location of all these paths. Let us plot them all on the same map first, for a quick visual evaluation.