I would like to show how to code the NAO robot to beat us at Jotto (5-letter Mastermind) with python in Choregraphe. I will employ a brute force technique that does not require any knowledge of the English language, the frequency of its letters, or smart combinations of vowels and consonants to try to minimize the number of attempts. It goes like this:

Coding this strategy in python requires only four variables:

At this point, I urge the reader to stop reading the post and try to implement this strategy as a simple script. When done, come back to see how it can be coded in the NAO robot.

First, a screenshot of the root view in choregraph. Note the simplicity of the code. 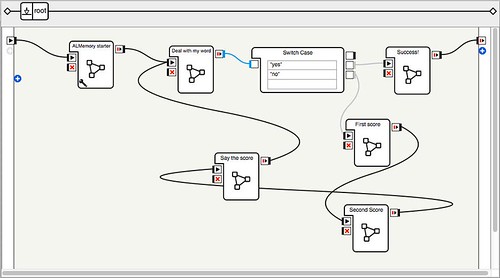 The first box, ALMemory starter, is a script box where we define all variables needed to run the program — old school. This is the code of that box:

The second box, Deal with my word, is a flow diagram containing two boxes: 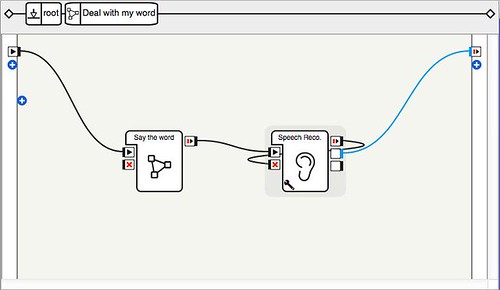 This is the code of Say the word:

A switch case is next: if the player says “yes”, the program concludes with the script box Success!, that states the number of attempts. The code is simple, and it illustrates once again the way to access data from ALMemory. The only relevant portions of the code on that box are the methods onLoad and onInput_osStart:

If the player says “no”, we retrieve the two scores with two flow diagram boxes: First Score and Second Score. I will present the structure and code of the latter, and leave the code of the former as an exercise. 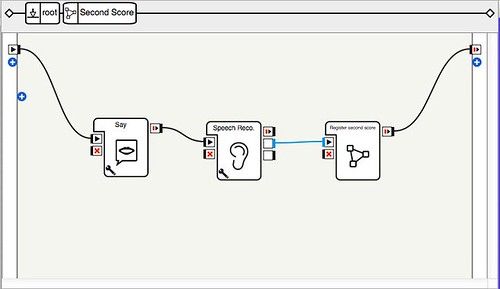 The first box is a simple Say that asks for the score. The second box is a Speech Recognition box that expects any digit from 0 to 5. The third is a script box that receives the second box output (as a string), and performs the following operation (only onLoad and onInput_onStart are shown):

And finally, the script box Say the score. This is where the magic happens. In this box we receive the complete score, and filter all the words from step to eliminate those that do not share the same score as guess. We perform that with the following code:

That is all! I hope you enjoy playing Jotto with your NAO. The code can be greatly improved by adding motions in the different steps, or implementing better winning strategies. With brute force, NAO is able to find your word in about 5 attempts (as average, of course). Do you think you can find a strategy that brings this number down to 4 attempts? If so, I would love to hear about it.